While the multiplayer online shooter genre is currently dominated by the likes of Call of Duty: Warzone, Apex Legends, Valorant, and Fortnite, that doesn’t mean that other developers are content to sit on their laurels and not innovate in the genre. There are new first-person and third-person shooters being launched all the time, and that will remain true well into the future. If you’re a fan of shooters, there are plenty of games to look forward to, especially these Top 5 Upcoming Online Shooters of 2023. So when you’re ready to jump into the fray and fight, load up your weapons, and let’s get started!

If you enjoy realistic shooters, then Military from Thunder Devs should be on your watchlist. This game promises to be a highly strategic multiplayer shooter with plenty of features to foster a growing community. The game will have over 85 weapons that range from small arms like SMGs and pistols, to much larger weapons like sniper rifles and rocket launchers. Test out all of these different weapons across 20 unique maps designed to funnel players into tense firefights. Kit out one of 10 unlockable characters with over 400 different skins for ultimate customization. But, perhaps the best thing about Military is that the game will be entirely free to play. The game is designed in such a way that everything can be obtained just by playing, with no predatory microtransactions being forced down your throat. You can enjoy standard free for all and team deathmatch modes when Military launches into Steam Early Access next year. 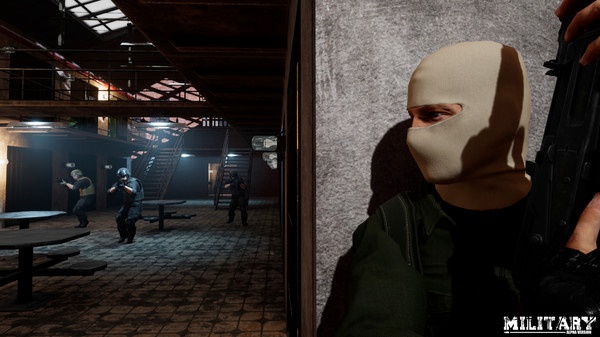 If you want your shooter to have some flair and style, then the upcoming Hyenas from Creative Assembly and Sega looks like it will scratch that itch. Hyenas is a sci-fi multiplayer shooter with a unique personality and sense of style. In the world of Hyenas, Earth has finally succumbed to humanity’s mistreatment, causing the rich to escape to Mars while everyone else tries to survive on an orbiting slum called The Taint. Not content to let the rich have an easy life, a group of thieves called the Hyenas travel to the rich’s Plunderships to take all of their high-priced Earth artifacts. Combat security robots, navigate environments in zero gravity, and fall in with the other Hyenas to take back what is yours.

For survival third-person shooters, we make our way over to BadBit Games’ Dead District: Survival. This game is a huge sandbox survival game that can be played in either single-player or multiplayer modes. Its world is vast and dangerous, filled with zombies, hungry animals, hidden traps, and the survivors who planted them. While you might find comfort in other normal humans still being around, you might find that those survivors are actually your worst adversaries and will kill you for the can of food in your pocket. Make your way through the mission system with friends as you manage hunger, thirst, and health among other things. Build a shelter, upgrade your skills, and ultimately survive when Dead District: Survival enters Steam Early Access.

Dysterra is another sci-fi fps but is played more straight and gritty than the colorful goofiness of Hyenas. Developed by Reality MagiQ and published by Kakao Games, Dysterra is a sci-fi survival game where players will compete with each other in the remains of a destroyed planet Earth. Aside from the intense shootouts you’ll experience, you can also cooperate with other players to build shelters, craft items, and loot ruins for new items and equipment. If PvE chaos doesn’t suit you, then the game can also be enjoyed in single-player mode. Experience all of the sci-fi action of Dysterra when it launches sometime in 2023.

Finally, if you’re going to play a shooter, why not play one from the creators of Rainbow Six Siege and Far Cry? That’ll be Ubisoft’s XDefiant, which is their free-to-play FPS that looks to be set within their incredibly successful Tom Clancy universe. The game features several factions facing off against each other, namely the Wolves, Echelon, Outcast, and Cleaners, which are from Ghost Recon, Splinter Cell, and The Division, respectively. Regardless of which faction you choose to support, the operator you take will be customizable via their weapons loadout, skills, traits, and abilities. This gives players plenty of options to make their characters their own. You can enjoy the 6v6 matches in several modes such as Domination and Escort when the game is released at some point in the future.