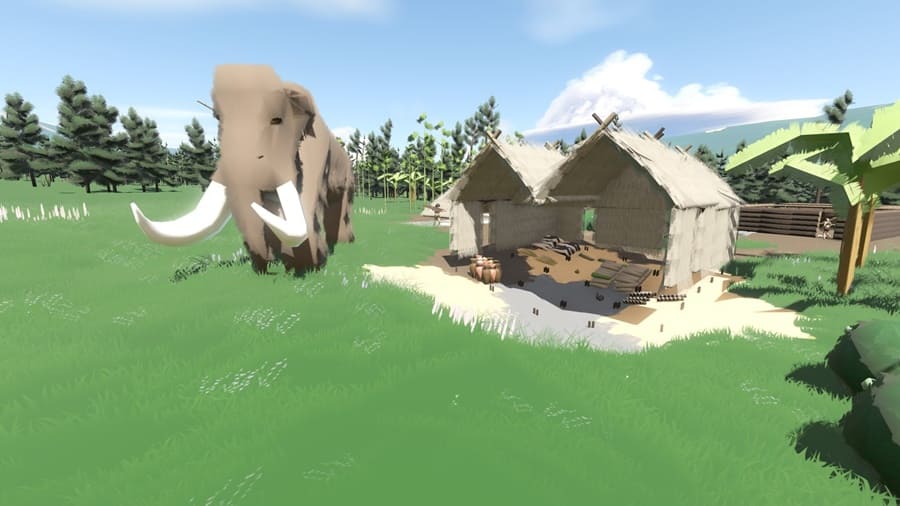 Hunting in the Sapiens game entails killing roaming animals, butchering their carcasses with a knife, and cooking the raw meat over a campfire to make edible food. The ability to hunt and kill small animals with simple projectiles is required for basic hunting.

Hunting can be used at any point in the game, but it is most effective when used as an early-game or late-game supplement to foraged food or farming. To learn the basic hunting skills, a sapien must hunt a chicken. Throw small stones at the chicken to kill it, then investigate it with a sapien. Later in the game, you can investigate alpacas or mammoths to learn spear hunting skills. This involves throwing spears at these animals to kill them. Larger animals can feed larger tribes or a smaller tribe for a longer period of time. Food storage is necessary to ensure that there is always enough for your tribe members. When there is enough space, it is stored in storage areas, but it will decay. Different foods degrade at different rates, though food generally degrades more slowly when stored inside. Food that has decayed is no longer edible, so delaying decay for as long as possible is preferable.

Hunting allows you to quickly produce a large amount of food in vast quantities. When necessary, it can also be used to supplement other sources of food for maximum efficiency. One disadvantage of hunting is that you may not always be able to locate huntable animals on a map, making it unsustainable for continuous food production because nearby animal sources may quickly become depleted.

In Sapiens, chickens are huntable. As previously stated, chickens can be researched to obtain the “Basic Hunting” skill.

The “Spear Hunting” skill can be unlocked by researching alpacas and mammoths. The alpaca is a herbivorous animal that can be found all over the world. Later in the game they may be hunted and butchered for alpaca meat and alpaca woolskins. They are a good food source.

That is all you need to know about hunting in Sapiens. You can also check out our other Sapiens guides listed below.

Sapiens: Ultimate Crafting Guide – Everything You Need to Know!

Sapiens: How to Plant Trees, Vegetables, and Berry Bushes

Far Cry 5 – 4 Things You Should Know Before Hunting

Sapiens: Ultimate Crafting Guide – Everything You Need to Know!

Valheim beginners guide: Everything you need to know to get started in Valheim